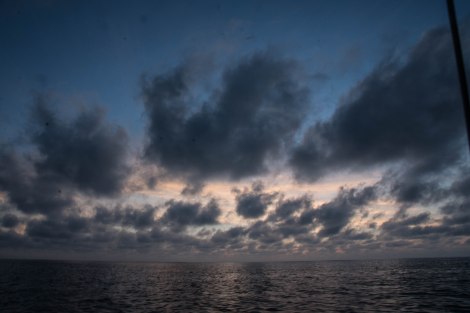 Best guess right now is that we’re two, maybe three days out from Galapagos. The winds have continued light and even slacked a little more as of noon on February 19th. Aaaarggggh! We wanted MORE, not less. Darwin’s archipelago has been our closest bit of land for some time, now about 150 nautical miles away and a little bit west of south. The next nearest land is the tiny Columbian nature preserve of Isla Malpelo at 390 miles east. The nearest mainland is probably Punta Salsipuedes in Costa Rica. Five hundred miles.

Maybe it’s a sign that land fall is imminent, at least for the birds, but does the roosting of red footed boobies make it eminent? We gained four on Mabrouka last night, the first on the bow pulpit just before sunset, a second commencing stealth crap attacks from atop the mizzen mast during the eight-to-eleven watch, and two conducting a range war over dinghy territory, wielding beaks and squawking at each other occasionally during the night and on into the daylight hours.

No, this is OUR spot!

Life aboard has settled into a pace, if not actually a routine. Watches were agreed upon before departure to be four shifts of three hours each, from 20:00 to 08:00 hours. That gives one person two shifts for the night, but that rotates every night and gives us six hours off watch, so the crew seems to be happy. Meal preparation is mostly conducted by whomever is so inclined or otherwise gets tired of waiting for someone else to take up the task. Brother Roger has bourne the heaviest load, but cheerfully. There’ve been the occasional multi-component dinners, but usually we scramble up one-pot meals based on whatever chunk of meat happens to have thawed out. The special requirements for Roger’s diet have not be a problem in the least. First of all, he’s being practical about satisfying its demands. Second of all, the demands are not hard on Lisa and I. Meat, vegetables, fruits, grains, …what’s not to like? The diet seems more a matter of timing than restricted foods.

Each of us is beginning to fend off the potential boredom of long, slightly rolling days riding on a quiet wind in different ways. I’ve begun to write a little bit, thus this blog post and more numerous than usual entries in the log. Lisa’s reading a lot, and Roger has spent chunks of the last two days doing some coding for a course he’s teaming up on to conduct on line. The ever-useful nap is a resource that is freely applied as well.

We have not yet instituted the well-esteemed pastime of deep sea fishing. Well, that’s not strictly true. I did troll my medium weight rig for a little while off Las Perlas and snagged a Silky shark about three feet long, but didn’t keep her. Since then we’ve hesitated to pull a hook until we feel we’ll actually do the victim culinary justice and not just build up seafood stores on top of meats that demand to be eaten before they spoil. I am anxious to try out the true deep sea rig that my old college classmate, Scott Richards made a special trip to Panama City to deliver to me. Don’t worry Scott, we’ll be pulling in that big yellow fin soon. 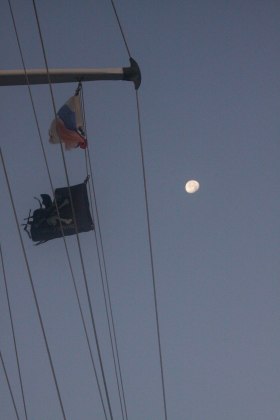 Morning watch draws to a close. (Photo by Lisa Neyman)

I’ve had a few projects that Mabrouka has demanded attention for. The first day out I opened up the bilge to clean the speed transducer. At this point I should admit that I’m a lazy seaman. I hope it doesn’t kill me one day when I fail to tend properly to some critical inspection or preventive maintenance chore, …like checking the bilge. Anyway, I lifted the floorboard and could probably be quoted as exclaiming, “Holy shit!” The bilge was half full of water. I chided the bilge pump into action, but the water level refused to go down. We used the manual pump, which worked just fine. To make a long story short, even installing the spare bilge pump didn’t drain the water until we figured out that the overboard discharge valve was clogged with debris. So after that the pump has worked but its automatic actuation feature didn’t deactuate. I don’t know what the problem is yet, but I’ve installed a manual automatic actuation feature deactivator switch for the time being.

Hm, what else have I done for Mabrouka on this trip? I have to troubleshoot the alternator on the main engine, but we’ve got the Honda generator to take up the slack. Ah, the propane quit working. Just stopped. No flame. We boiled water on the barbecue for a night, but the next day Roger and I traced the fault to a non-functioning propane control. I bypassed that, which also eliminated the safety sensors, so we’ve instituted a policy of switching the propane off at the control panel whenever it’s not in use. Hold on a sec while I go check the switch .. well, the gratings are too small on Mabrouka to lash Roger to them and get out the cat-o-nine tails, but virtual floggings will continue until morale improves.